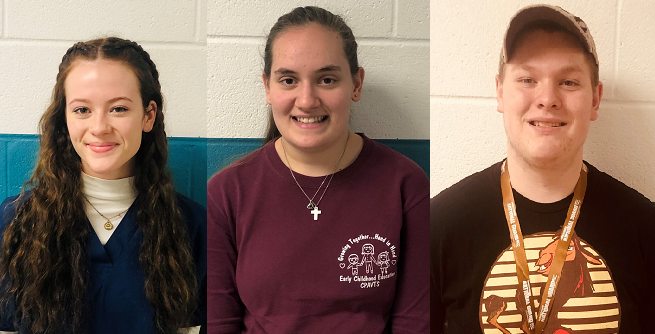 Rotary Students of the Month- February 2022

Gia Rockwell is a West Perry High School in the Dental Assisting. She is a member of HOSA, plays Volleyball, West Perry and is currently employed by Cluggy’s (Pizza Shop). She has made the Honor Roll and been named as a Student of the Quarter, CPACTC. She also made the Distinguished Honor Roll, West Perry. After graduation she plans to attend Harrisburg Area Community College and major in Dental Hygiene. (Mechanicsburg-North Rotary Club)

Beth Reisinger is a West Perry High School in the Early Childhood Education program. She is a member of the National Honor Society, West Perry, National Technical Honor Society, CPACTC, plays Soccer, participates with Student Christian Fellowship, West Perry, CLC Church, and children and youth programs.  She currently works at PeCo Generations, and is a volunteer at Blain FC. She made the Honor Roll and was named Student of the Quarter, CPACTC. She also received the West Perry Citizenship Award. She has applied to Harrisburg Area Community College and Shippensburg. She plans to major in Early Childhood Education. (Mechanicsburg-North Rotary Club)

Wyatt Fake is a Mechanicsburg High School in the Welding program. He is a part of the Stage Crew for school productions, at Mechanicsburg. He volunteers doing yard work, and enjoys fishing, kayaking, and roller skating in his spare time. He was named Student of the Quarter and mad the Honor Roll, CPACTC. His future plans include attending Harrisburg Area Community College to major in Welding. (Mechanicsburg Rotary Club)